skip to main | skip to sidebar

Bloomberg keeps filing F.O.I.A. requests to find out what the Federal Reserve wants kept secret. Fed Chairman Ben S. Bernanke’s unprecedented effort to keep the economy from plunging into depression included lending banks and other companies as much as $1.2 trillion of public money, about the same amount U.S. homeowners currently owe on 6.5 million delinquent and foreclosed mortgages.

It wasn’t just American finance. Almost half of the Fed’s top 30 borrowers, measured by peak balances, were European firms. They included Edinburgh-based Royal Bank of Scotland Plc, which took $84.5 billion, the most of any non-U.S. lender, and Zurich-based UBS, which got $77.2 billion. Germany’s Hypo Real Estate Holding AG borrowed $28.7 billion, an average of $21 million for each of its 1,366 employees.

Timeline of Bloomberg's lawsuit against the Fed

- May 21, 2008: Bloomberg files a Freedom of Information Act request. The Fed denies this request

- Aug. 24, 2009: Judge Loretta Preska rules that the Fed must disclose this information

- Aug. 27, 2010: Court of Appeals gives Federal Reserve 60 days to decide on taking the case to the Supreme Court

- Oct. 26, 2010: Federal Reserve decides not to join the Clearing House Association in asking the Supreme Court to consider an appeal.

The interactive graphics are wonderful. Check out the story in the Atlantic, too. 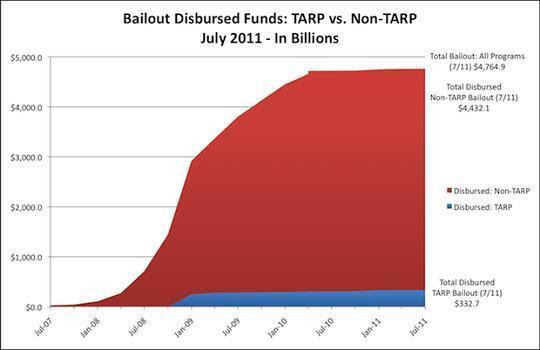 From an accounting perspective, the loan programs shrank, excess reserves were retired, and the Fed simultaneously reprinted money to purchase the MBS and Treasury securities. It did not borrow money from commercial banks. Put another way, the money printed to fund the emergency loan programs, and more, was morphed into MBS and Treasury securities and this is clearly shown in a chart of the Fed’s assets: http://www.cumber.com/content/misc/fed.pdf

Think about it. Where would the excess reserves come from that banks held with the Federal Reserve, if the Fed hadn’t originally made the emergency loans or subsequently purchased assets? If Mr. Melloan’s analysis were correct, the excess reserves, which are assets to the private banking system, would have had to come from shrinkage of their assets and deposits, thereby turning required reserves into excess reserves, or by keeping their balance sheets the same size and shifting the composition of their assets by reducing loans and securities and increasing their reserves at the Federal Reserve.

Just before the crisis in August 2007, banks held only $45 billion in total reserves, and $40 billion of that was in the form of required reserves. Clearly, shrinkage of deposits could not have funded the huge increase in excess reserves in the banking system that came with the Fed’s emergency lending programs. What about a shift in the composition of bank assets from loans and securities to deposits at
the Fed? Data show that while bank loans have declined by about $600 billion, securities holdings have increased by about $600 billion. Therefore, the so-called borrowing from commercial banks could not have come from declines in their securities and loans.

So, George Melloan has totally mis-characterized the source of funding for the Federal Reserve’s QE1 and QE2 asset purchases. The Fed first printed high powered money through its emergency lending programs and as those programs were phased out the Fed again purchased agency mortgage-backed securities and Treasuries from the public by printing money, and the proceeds of those purchases show up as customer
deposits in banks, with the offsetting asset being not new loans but excess reserves held at the Fed.

In conclusion, the whole crisis has simply redivided the pie, and shifted debt from private banks to the US public by 'printing' money and thus reducing the value of US currency. This shifts value out of tangible goods while keeping the ratios of wealth steady. As real value bounces back, only those with capital will be in position to buy up resources. As the commoners have no capital, and the governments are in deep debt, the only people with capital will be private banks, owned by the wealthy.
Posted by Philosopher3000 at 8/28/2011 05:53:00 PM No comments:

Making Money Out of Market Crash

Looks like even those at the Harvard Business Review are beginning to gain enlightenment.

Now, my little principle might cause those with hand-made suits and beancounterly tendencies to leap out of their chairs and hit me with the tarantallegra jinx. But even the cynics might be willing to admit: given a mysteriously non-recovering "recovery" for a global economy perpetually poised on the brink of perma-crisis, the status quo's out of ideas, out of options, and running out of time.

In an economy dedicated to the pursuit of more, bigger, faster, cheaper, nastier, the greatest hidden cost and unintended consequence is that something vital, enduring, resonant, and animating has gone missing from our lives — and it might just be the biggest thing: meaning in what we do, and why we're here. -

It is obvious that there are no easy answers, but I suspect that cooperation, courage, and compassion, are becoming survival skills, putting even the scared, cynical competitors with business degrees on the verge of extinction.

Capital in the 21st Century
by Thomas Piketty


The End of Money
by Tom H. Greco


Ha-Joon Chang
"23 Things they don't tell you about Capitalism"